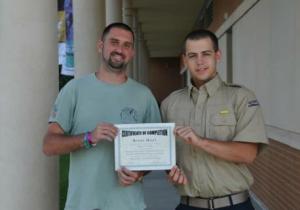 This month we feature a rising star within the American Recovery Association, Brent Hoel from Charleston, West Virginia. As a third-generation ARA member, Brent has grown up in the industry, attending conventions with his father and getting ready to take the reins of the family business. After graduating from Fairmont State University with a business degree, he has continued to build on a strong legacy with his memberships in YPRC, TFA and Eagle Group XX. As one of the first members of YPRC, he recognizes the responsibility and opportunities ahead for his generation: “I’m trying to become more hands on, since we are going to be the ones in the positions to make changes and decisions. I’ve been around these organizations for so long, but never really had a voice.”

Just as his big picture vision has driven Brent to get even more involved professionally, it also makes him a great mentor for young people. He isn’t one to brag, but we were really impressed to learn about his volunteer work with at-risk youth at the Mountaineer Challenge Academy. Not only does he act as a positive role model and provide long-term guidance, but it is a mentor program that requires upfront training, at least four hours per month (with reports) and a two-year commitment. For Brent though, it is one-hundred percent worth it to be able to help these youths who really need an outside supporter to get through the program and stay on track after graduation.

Although he may not have much free time these days, Brent enjoys getting outside and spending time with nature. While he loves scuba diving, skiing and traveling around the world, he’s just as content staying close to home as long as there’s a body of water nearby. “Whether it’s on the Kanawha River here in Charleston on my boat, or on the Greenbrier River kayaking with my dog, I enjoy spending a lot of time on the water.”

One thing is for sure — we are very proud of Brent. We should all be able to sleep well at night knowing that Brent is one of the major players in the future of our industry. Thanks for all that you do Brent!