As the Car Industry Recovers, the Repo Man Does, Too

Rick Newman is a writer and blogger on The Exchange, a Yahoo Finance blog. He recently interviewed Executive Director, Les McCook, about the recent trends of the recovery industry. His original blog post can be found here.

If the repo man knocks on your door, it will probably be a bad day for you. But it might reflect good news for the auto industry.

The repossession rate for automobiles has ticked up this year, after two years of sharp declines. If the economy were still in recession, that would probably be terrible news, meaning more people were hitting hard times and losing their cars. Once the economy has bottomed out, however, a rise in repo rates typically means something else: Loans are being extended to more people, a sign of healing in the economy.

Many auto loans are finally going to borrowers with damaged credit, which inevitably leads to more defaults — and more business for the repo man. But a lot of those new borrowers won’t default, and their purchases are an important sign of a key industry returning to normal. “The subprime market is healthy,” says Melinda Zabritski, senior director for automotive credit at research firm Experian (EXPN). “Nothing I’m seeing is alarming.”

Repossession rates are still far below levels hit during the recession, when the housing bust and a huge bout of layoffs sent default rates on auto loans soaring. Here are repo rates going back to 2006, courtesy of Experian: 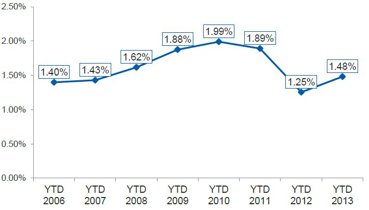 Car sales plunged during the recession, of course, and repossessions followed (with a lag of a year or two), since the only people who could buy cars for a few years were those with good credit scores or enough cash to cover the entire purchase. The demise of subprime lending was a necessary correction, since too many people got loans they couldn’t afford or financed a car purchase by borrowing against home equity that suddenly evaporated.

Car sales have bounced back this year, to an annual rate of about 15.5 million per year, and subprime loans are one reason why. The pace of sales is still below the peak level of about 17 million in 2005, but it’s far better than the dismal numbers in 2009, when sales fell below 10 million. Loans to borrowers with subprime credit scores account for 27% of auto loans so far this year, according to Experian, up from 18% in 2008. The upturn has juiced the earnings of automakers such as Ford (F), Toyota (TM) and Honda (HMC), and helped once-moribund Chrysler and General Motors (GM) get back on their feet.

Overall, the amount of auto loans outstanding hit nearly $850 billion in the third quarter, a new all-time high, according to the Federal Reserve. If the housing market had recovered that strongly, the economy would be roaring ahead. Alas, the total amount of mortgage loans outstanding is still about 15% below the 2008 peak, as the housing recovery lags the turnaround in autos.

There’s room for still more lending in the auto business. Most of the rise in subprime loans has come from finance companies that specialize in high-risk lending, such as Consumer Acceptance Corp., Exeter Finance and Westlake Financial, while regular banks and the automakers’ in-house financing arms have mostly stuck to lower-risk consumers. That may leave more room for traditional lenders to reach out to subprime borrowers. And the “deep subprime” segment — people with credit scores of 550 or lower — remains a no-go zone for many lenders who still aren’t ready to venture back into the riskiest part of the market. Once they feel more confident about the economy, however, they probably will.

Meanwhile, in the recovery industry — as repo men refer to their business — a painful bust may finally be coming to an end. “Business has quit falling,” says Les McCook, executive director of the American Recovery Association and the former owner of a repo business in Austin, Texas. “But it’s still not back to the levels of former days.” That’s because the total volume of car sales and loan defaults is still down, even if repo rates are up.

McCook says he also detects a change in attitude among car owners, since fewer of them own houses these days: “It used to be you’d give up everything else to keep your home. Now we’re paying for cars before we pay for homes.” Some car owners, as a result, are a lot more defiant when the repo man comes around, even if they’re months behind on their loan.