This month’s Member Highlight is Ian Eusebio, son of Michael Eusebio from DigitalDog Auto Recovery in El Dorado Hills, California. Ian is currently a junior at his local high school in El Dorado Hills with future plans of attending a 4-year college to major in engineering or computer science. This interest came about when he decided to join a district robotics club called Circuit Breakers. After being in the club for 3 years, his passion for robotics and engineering has greatly increased. 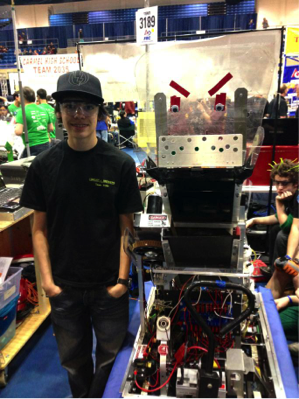 The robotics club is sponsored by a national organization called, FIRST – For Inspiration and Recognition of Science and Technology.  Clubs around the country join through their local high schools to compete each year in building a robot that must be able to perform and play a designed game. The game changes each year, which requires the team to redesign their robots’ ability.

There are approximately 3000 clubs who participate in regional competitions across the US, hoping to win an opportunity to compete on a national stage each year in St. Louis, Missouri, but only 400 teams make the national event. Ian’s team has been fortunate enough to compete on the national stage the last two years. Though they have never won the championship, competing at the highest level gave each of Ian’s teammates an experience FIRST hopes will challenge and inspire them to continue in what can be a bright future in science and technology.

We are honored to have such a future engineer within our membership’s family. Way to go, Ian!

Do you have an exciting hobby or are involved in raising money or awareness for a worthy cause? Please help us by submitting pictures and stories of those who deserve some recognition or those who are involved in projects of interest. We’d love to hear from you – submit your interesting stories and photos to rachel@wellandgoodpr.com.